What Motivates Me to Keep Running

Today, I’m feeling very thankful that I work from home, and that allows me to have spare time for myself in the morning to do some exercise and have some quality time with my boyfriend and dogs. Instead of getting myself ready to go to work and catch the bus, I get to use that time spending some quality time with people that are important to me.

It’s been raining here in Hong Kong for a few days now and the forecast says that it will rain for the whole week. I’ve just re-started my running journey, now for someone who is not very interested in physical activity, I want everything to go as planned. I woke up today at 5:30 in the morning and it’s pouring rain. I decided to not run and went back to bed. I woke up at 7 again as it stopped raining and the dogs need to go for a walk and do their business. As we were walking back home, I was looking up to the sky and I see some light clouds and it’s not as hot though it’s very humid. I asked my boyfriend if he wants to run and, of course, he immediately said let’s go.

We started running, and it feels so good. I just wanted to run at my full speed. He told me to pace myself so we can run farther. On this run, we decided to run for 2KM only. I didn’t feel any tiredness or pain till we reached the first kilometer, how good is that? Just before we reach the first kilometer, he asked me if I can push to run 3KM, and I said yes, let’s go. We reached 1.3KM and I told him let’s turn around. I was feeling tired already and I thought that if we go for 3KM I might not make it. So I decided to turn around instead and still have a good distance.

Heading back home the rain started to pour again and I did not care for it. It felt good. It was helping me cool down a bit. I enjoyed that run in the rain, we passed by people at the bus stop heading to work. Passing by people gives me a push, I just want to run as fast to impress them, and maybe I can inspire them to run too. Even though I wanted to stop badly, I didn’t because I don’t want to disappoint my boyfriend and I don’t want to see people that I’m weak. So, I use that to push myself harder and to just keep running. It’s a great motivation for me, it works really well.

I can feel that I have improved already and it’s motivating. Having someone who’s been doing some research about running really helps. He tells me what to do and I just do it. My advice here is to just find that motivation and use it to your advantage. Improve yourself. Let’s better ourselves together. 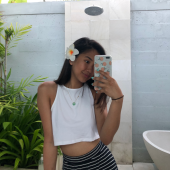 HOW TO FIND THE RIGHT RUNNING SHOES

Calendar Club – So what is it?